Recently my friends and I participated in the 48 Hour Film Project, a competition in which you have 2 days to write, shoot, and edit a short film with specific required elements. It’s one of my favorite competitions, and this was actually the 7th time I’ve participated.  While we have yet to come close to winning the competition (HA!), we have made several movies that, in my (biased) opinion, are pretty solid.  Here are a few of the personal rules that my team has adopted for making a film in a weekend with no sleep and no budget:

Do anything you can before your 48 hours begins. Find your cast and crew. Make sure everyone knows what to expect from the weekend. The more you can assign tasks to separate, autonomous groups, the better your film will be. Find out what locations are available, then, once the project starts, throw all the location prep out the window and instead get access to the one place you didn’t contact ahead of time.

Wild-Card Genres are Your Friends

Your genre determines your entire film, so it’s important to own it. Some of the broader genres, like “Comedy” or “Drama,” are tempting, but are really just boring and a trap. The wild-card genres are more restrictive, which will actually make it easier to discover an interesting story. Our team always hopes and prays for “Film de Femme” or “Musical/Western,” but have yet to get them.

The closer your film is to 4 minutes long, the more rewatchability it will have, and the easier it will be to shoot. When you think about your favorite YouTube videos; they’re probably short, likely around two minutes. Plus, if your script is only 4-5 pages long, it’s unlikely that you’ll be staring at a late 8.5 minute edit wondering how you’re going to cut down your story.

It’s unlikely that many people will care about the characters or plot in your 4-7 minute short film made in a weekend. Really, they won’t. Your best hope is to make ’em laugh. As a bonus, the audience will forgive your technical gaffes if the movie is funny. (NOTE: for more professional/established teams, this rule may not apply).

Don’t be afraid to try something crazy. The movies that are remembered are the ones that take chances. Write in a way that’s unconventional. Throw a random musical number in there. Steer the plot in a completely unexpected direction in Act 2. Montages are a great way to cram a lot of story into a 4-7 minute runtime. DON’T write a movie with a last-minute betrayal ending with the hero being shot by a prop gun. There is guaranteed to be at least one of these in every screening. 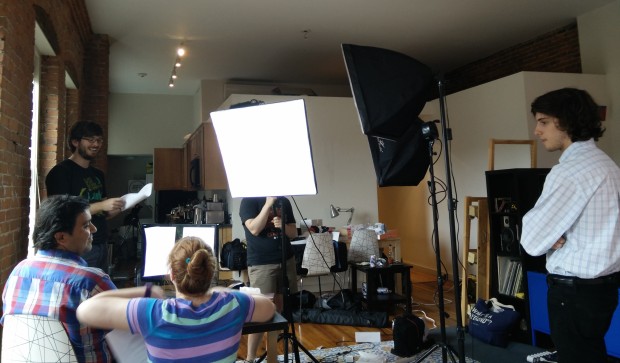 A shot taken on set during our 2015 submission, “You’re My Inspiration.”

I understand now why TV shows and Hollywood films are shot on sound stages: they’re much, much easier to control. Shooting outside seems appealing, but inevitably you’ll find a PT Cruiser driving in the background of your post-apocalyptic scene. Find a friend willing to let you shoot in their nice, big, open house or apartment, and shoot the whole film there. You can configure a large enough space to look like an impressive number of locations, especially if at least one wall is an interesting color or texture.

Shoot the Meat and Potatoes First

Always shoot your main, boring dialogue scenes first. It’s easy to cut back on some of the bigger set-pieces later, but the core scenes have to look good and will be best executed before everyone gets tired. Make sure you get multiple takes, from multiple angles (even if it gets groans from your entire crew).

Just because the film is shot on the quick doesn’t mean you should skimp on the fundamentals. Keep the camera on a tripod. Follow the 180-degree rule for shot-reverse-shot. Get your microphone as close to your actors as you can, even if it’s duct-taped to a broom handle. You can do a lot with a little if you stick to the basics.

This is the mistake I most commonly notice in 48 Hour films. It doesn’t matter how nice your camera is; if you don’t light your actors, the movie won’t look professional. You don’t need expensive lighting equipment for 3-point lighting; just having some work lights with some $5 clamp lights as fill will do the trick. If you’ve got a little more money to spare, budget photography kits can be quite reasonable.

Your editor will thank you for this. Keep records of which take was the best, and which ones are a bust.  So much editing time is wasted looking for that “perfect take” that’s impossible to find.

This is guaranteed to screw you if you don’t. Leave yourself plenty of time to export to avoid frantically running through the city streets trying to beat the clock.

It’s All For Fun

It’s important that everyone involved is having a good time; that’s what the whole competition is about. It’s easy to forget it on Sunday afternoon when you’re scrambling to complete the project on time, but the experience itself is what everyone will remember in the end (along with the finished film, of course).

My favorite part about the 48 Hour Film Project is that it forces you to finish everything in a weekend, no procrastination or excuses. In case you’re curious, here’s our submission to this year’s competition.  Thanks again to everyone who participated on our team this year, I’m really proud of what we were able to accomplish.

Hope the advice is helpful! Participated in the past? Let me know what I missed in the comments below.