Swiss Army Man was perhaps the most polarizing film of Sundance.  There are stories of how people walked out of its premiere screening, and it’s easy to see why.  Depending on expectations, this film could be a kinetic masterpiece or an extended fart joke.  Personally, I think the film is the former.  This movie is completely insane, and I believe that “The Daniels” (Dan Kwan and Daniel Scheinert) are the next Neveldine and Taylor, but with a stronger eye for the cinematic.  My opinion is that this movie is best if you go into it completely fresh, but unfortunately the trailer gives away a number of surprises.  If you haven’t seen anything, I recommend stopping here and just seeing the film; however, I’ll do my best to keep spoilers to what’s in the trailer for the first portion of this review.

Let’s start with the premise.  Hank (Paul Dano) is trapped alone on an island.  He is about to commit suicide, when he instead comes upon Manny’s corpse (Daniel Radcliffe), and discovers that, well, Manny can help him survive.  As shown in the trailers, there is plenty more to Manny than meets the eye, and soon the two are fast friends, traveling together and even having conversations (despite the obvious hurdle of Manny’s death). 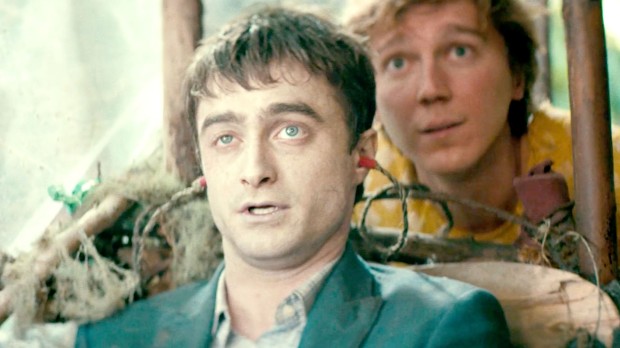 As alluded in the intro, the best comparisons I can come up with to this film are the Crank movies, and I mean that in the best way possible.  There is a visual feast portrayed on screen, and the sheer “I can’t believe I’m actually seeing this” nature of the unfolding events is incredibly compelling.  Where the Daniels succeed over the Crank series, however, is by imbuing Swiss Army Man with extraordinarily strong visual storytelling and an excellent sense of pacing.  While Crank is a mile-a-minute thrill ride, Swiss Army Man ebbs and flows at a perfectly brisk, yet sometimes measured pace.  This is a two-man act, and while there is dialogue, the movie is told largely through montage and visuals as the two grow and bond.

Everything about this film is insane, and it is unbelievable that it exists at all, let alone with such high production value.  The premise is ridiculous.  The scenery is colorful and beautiful, the music is full of energy, the plot full of surprises.  The humor itself can be somewhat juvenile at times, but the movie establishes that tone from the beginning and isn’t afraid to embrace it.

Both of the lead performances from Dano and Radcliffe are fantastic.  Radcliffe is going to get the most acclaim as the walking, talking corpse, but Dano is really the one that bears most of the emotional heft of the film.  The two have great chemistry together, and their bromance is very believable (especially in its most extreme moments).

I think this movie really has a chance to catch fire with audiences, and I highly encourage anyone to see it as soon as possible (just be prepared to weather more than a few boner or fart jokes).  I’m going to get into the ending for the last part of this review, so [spoilers] ahead.  Again, if you haven’t seen the film, stop here.

I’m at major risk here of taking this movie too seriously; the film itself certainly doesn’t.  But whatever, I’m going to attempt it anyway. In spite of the ridiculous high-concept story, Swiss Army Man is a movie with something on its mind.  The movie is a portrait of loneliness, and of the masks we wear in our daily lives.  Hank pines for Sarah, a girl that he’s never actually spoken to.  In his former life, he saw her on the bus every day, and never had the courage to speak up and talk to her.  He doesn’t have the courage to just “be himself” because society would frown on that.  This is a major recurring conflict between Hank and Manny, and Manny very much represents the idea that a true friend should love you for who you are.  “If my best friend won’t even fart in front of me, then what else is he hiding from me?” Manny asks. 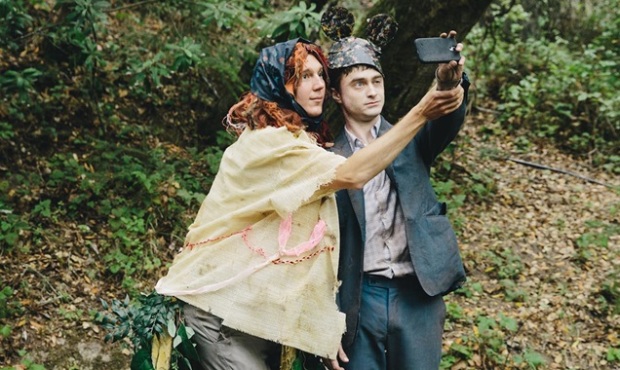 As the movie continues, the evidence mounts that Hank’s “true self” might either be crazy, or at the very least, a creep.  A talking corpse that propels itself through the force of its farts?  Doesn’t seem like something you’d typically find in any version of the real world.  Is Hank ever actually stuck on an island?  According to the narrative, he rides Manny across the sea to shore, but the beach they land on seems very similar to the one they just left.  All of the various superhuman traits that Manny possesses seem heavily imagined.  How did Hank get stranded in the fist place?  As the movie continues, it seems increasingly likely that the exile was self-imposed so that Hank might live out his crazy fantasy.  Even when he was in civilization, Hank was fairly creepy, taking a picture of Sarah without her knowing about it and using it as his phone background.  Now that he’s in the wilderness, he builds an entire shrine to Sarah and sets her as his sole motivation to return to humanity.  He even reenacts “meeting” her with Manny, dressing up like she might, and the two role-play fictional dates with Sarah.

Suspicions about Hank being a creep are confirmed when he returns to civilization and finds himself face-to-face with Sarah herself.  After all of this time spent pining for her, Hank discovers that Sarah is married.  She has a child.  She has an entire life of her own.  She has no interest in Hank; heck, she doesn’t even recognize him. And why should she?  He’s just another face on the bus.

Now Hank has a choice.  He can rejoin the world, get over Sarah, grow as a person, and make himself a new life in which he’s not a recluse but a functioning member of society.  Or, he can double-down on his “true self” and embrace the madness, celebrating his probably imaginary companion Manny as his truest friend.  Swiss Army Man being all about embracing madness, he chooses the latter and whatever consequences it brings.  He makes his decision, and sees Manny fart himself off into the sunset.  I’m unsure why Hank doesn’t travel off into the wild blue yonder with Manny.  Running away with Manny seems like the most thematically relevant ending to me.  Even still, Hank couldn’t be happier about seeing Manny reanimated once more.

Of course, another explanation is that this is just a movie about a guy on an island talking to a farting corpse.  The text is crazy enough that I’m unwilling to firmly commit to a stance either way.  However you read it, this movie is exactly the kind of original story that medium budget films have been lacking recently, and I cannot wait to see what the Daniels do next.