Pete’s Dragon (2016) is a magical live-action Disney adventure that harkens back to family films of decades past. It is a children’s film that treats its audience with respect, and is very mature in its exploration of magic and wonder.  Recently I had the pleasure of attending the premiere at the El Capitan theater in Hollywood, courtesy of The View and Fantasy Movie League. The experience was delightful, and I have many thoughts about the film itself. I am going to keep this post mostly [spoiler-free], keeping the conversation to my thoughts about characters, pacing, and tone.

Let me first start with my relationship to the original. I confess, I did not grow up watching Pete’s Dragon and actually had not seen it until the day before the screening. From my conversations, it seems that many people young and old are in the same boat. For the uninitiated, Pete’s Dragon was a 1977 musical featuring an early combination of animation and live action, and is in many ways comparable to Mary Poppins. Pete is an orphan boy who is protected by his dragon, Elliot. They are on the run from people who would do them harm, and eventually come across a young lighthouse keeper and her father. The family eventually adopts Pete, they fend off the villains, rescue a love interest, and everyone is one big happy family. 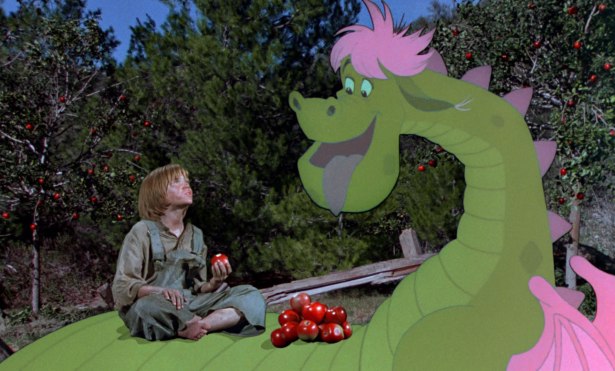 One of the biggest strengths of 2016’s Pete’s Dragon is that it does not feel terribly beholden to the original. There is still a protective dragon who can turn invisible, Pete (Oakes Fegley) is still an orphan. Meacham (Robert Redford) and Grace (Bryce Dallas Howard) are still a father-daughter pair looking to help Pete out. However, all of the major details are different. The lighthouse is exchanged for a Pacific Northwest lumbering village. The love interest, Jack (Wes Bentley), is not out at sea, but is very much around and has a young daughter of his own named Natalie (Oona Laurence). Villains are replaced with Jack’s brother, Gavin (Karl Urban), who simply fears what he doesn’t understand.

Personally, I found this break from source material extremely refreshing. This film will draw a lot of comparisons to this year’s The Jungle Book, a movie I did not particularly enjoy. Jungle Book frequently felt constrained by the roadmap of the source movie and novel, faithfully including each plotpoint and even forcing the two most popular songs into the mix. By contrast, in Pete’s Dragon, David Lowery is able to follow his own story and ideas without forcing needless callbacks to the original, keeping this from becoming an unnecessary strict remake.

Another major comparison to The Jungle Book is the seamless combination of live-action with animation. David Lowery takes a very different approach than Jon Faverau; rather than creating an almost entirely digital world using green screen, Lowery shoots in real locations whenever possible. CGI effects are almost exclusively limited to Elliot himself, relying instead on practical effects whenever possible. This is particularly fitting for this property, as the most lasting impression of the original Pete’s Dragon was the clever combinations of animated and practical effects. Elliot runs into a telephone pole, and the pole falls; he steps in wet cement, we see footprints appear. For the most part, the same goes for the 2016 version, the major exception being the flying sequences, which are also thrilling in their own way.

Of course, we live in a world in which computer generated imagery is commonplace in cinema, and effects alone cannot sustain a modern audience. Fortunately, Pete’s Dragon exceeds the original in terms of character development, particularly establishing a strong relationship between Pete and Elliot. When watching the original, I couldn’t help but feel that Pete’s relationship with his Elliot was most commonly one of a boy and his misbehaving pet. Here, the two feel more like equals, friends who care for and respect one another. Relationships between other characters also feel very believable, especially the love between Grace and Jack, or the brotherly love/hate between Jack and Gavin.

The performances throughout the movie are strong, with the standouts being the two child stars, Fegley and Laurence. Both turn in fantastic, believable performances, which are particularly impressive considering a major costar is frequently empty space for CGI. The adult performances are all solid as well. Bryce Dallas Howard is given a more interesting role here than her part in Jurassic World, and she really shines. The one exception is unfortunately Robert Redford. Redford is of course a legendary actor, so it’s somewhat surprising how stilted his performance is here. It’s particularly noticeable during his monologues to the children, our introduction to this storybook world.

The film is not without its flaws, chief among them being a lack of conflict and stakes. In the original, the conflict is simple and introduced immediately: the bad guys want to capture Pete and Elliot. By contrast, the 2016 film is almost entirely conflict-free for the first hour. Pete is taken from his woodland home and experiences a fish-out-of-water narrative, and Elliot is confused and maybe jealous, but there is never a sense of what lasting problems any of this creates; if anything, it’s great that Pete is experiencing the love of a family. It is not until the third act that anything of major consequence occurs, and as a result, the first half drags considerably at times. Because the conflict is introduced so late, the climax feels like a second-act action sequence, and then suddenly the movie is over. For me, the direction the film takes in these last 30 minutes made the journey worthwhile, though I could see others disagreeing.

As for the themes, Pete’s Dragon sticks to a tried-and-true message: there is magic in nature, and people will ruin that magic for the sake of profit. Children, as the uncorrupted among us, are the ones that still able to see and protect that magic. The tale is one we’ve seen before, but is executed well and will be remembered by its target audience. And that brings me to my final point…

This film is ultimately successful because it is aimed directly at children, yet is smart and mature in its storytelling. It allows the child characters to be the real heroes of this story, as they must protect and save the magical creature that only they understand. There are no fart jokes, no cheesy juvenile humor.  There is a lot of wonder and very little violence; even the guns in the film shoot tranquilizers.  It is not afraid to tell a story to children as though they were adults, without pandering or condescending.

Too many children’s movies these days play heavily to the nostalgia of the parents, The Jungle Book once again serving as a clear example. There is some magic lost by catering to the expectations that older audiences might bring to a remake. Not every film has to tackle adult themes, or include a cynical worldview for adult eyes. Pete’s Dragon, while itself a nostalgic property, takes a different approach by being something that is completely for the new generation. It is a more heartfelt callback to the family films of the 80s than most modern reboots, and it achieves this by going in its own direction. The narrative is frequently predictable and the pacing feels strange at times, but this is all clouded by my perception as an adult. I believe that children are really going to love this film, and that 20 years from now Elliot will be the Falkor for kids of the 2010s.