“While We’re Young” is a fascinating exploration of the transition from adolescence to adulthood, and what it means to truly “grow up.”  I really loved Noah Baumbach’s previous film, “Frances Ha,” and came into this movie with very high expectations.  For most of the film, “While We’re Young” was exactly what I was looking for.  Aging is a struggle that everyone will face at some point in his or her life, and as a result the situations are extremely relatable and frequently hilarious.  Many broad comparisons are made between Gen Xers and Millennials, and it is fascinating to see Baumbach explore concepts like nostalgia versus ironic enjoyment.  I highly recommend the film to anyone interested in the premise.

All that being said, I had some strong opinions about the final 30 minutes or so of this film.  For me, a film succeeds or fails based largely on its third act.  The climax is the screenwriter or director’s best opportunity to really drive home the ultimate message of his/her movie.  It is what the audience is left with as they walk out of the theater.  The rest of this post is will be talking about the ending in depth, so [spoilers] ahead.

To me, this movie has two logical directions it can go, depending on its underlying message:

Act 1) Josh and Cornelia feel isolated as their old friends become parents, and decide to connect with a young, hip couple, Jamie and Darby.

Act 2) Reinvigorated, Josh and Cornelia attempt to relive their youth by hanging out with said couple. At first this goes great, but eventually things begin to feel unnatural.

Act 3) Josh and Cornelia realize that they’re “too old for this shit,” and decide to have a child, reigniting their old friendships.

Act 3) Josh and Cornelia decide that “growing up” doesn’t necessarily mean “having kids” and find another way to reconnect to their peers.

What I didn’t expect was for the movie to play out like this:

Act 1) Josh and Cornelia feel isolated as their old friends become parents, and decide to connect with a young, hip couple, Jamie and Darby.
Act 2) Reinvigorated, Josh and Cornelia attempt to relive their youth by hanging out with said couple. At first this goes great, but eventually things begin to feel unnatural.
Act 3) Josh goes on a quest to prove that Jamie is a manipulative asshole who is willing to fabricate the truth for the purposes of his documentary. 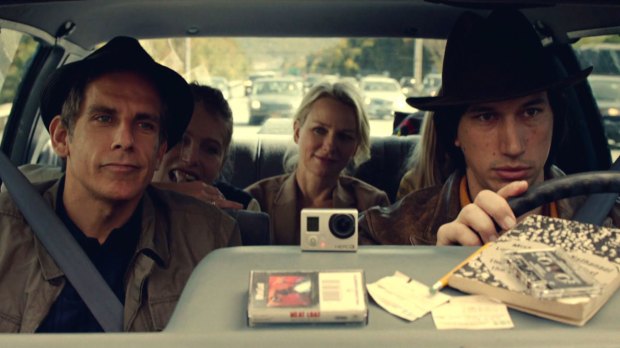 Now, granted, I’m being a little unfair here. The final scene + epilogue certainly show Josh and Cornelia overcoming their fears and deciding to adopt. It’s exactly what the audience wants, but those 5 minutes feel completely unearned. Instead of reaching the conclusion naturally, we spend a solid 30 minutes focusing on Josh’s competition with Jamie, including a vindictive investigation and eventual confrontation.

The climactic moments at the gala are particularly cringe-worthy. Josh’s lecturing of Jamie about the ethics of documentary filmmaking while Cornelia’s dad gives a speech about truth through cinema felt extremely heavy-handed. Honestly the scene seemed right out of a far less-impressive Stiller film, “The Secret Life of Walter Mitty,” one of the most indulgently on-the-nose films of the last few years. Ultimately Josh’s “grand reveal” is met with little more than a shrug from both the characters and the audience.  “Hedge Fund Dave” garners some laughs by openly expressing his boredom with the truth-vs-story debate, but this is a moment that belongs earlier, not as the “culmination” of the entire film.

Don’t get me wrong, I think there are some interesting points brought up in the documentary subplot. However, many of those ideas belonged in a completely different movie. The intention was probably to serve as an example of the moral disconnect between the two generations, to show an “overly-entitled” Millennial generation.  “If I hear a song I like, or a story, it’s mine to use,” says Jamie.  Personally I don’t think the metaphor works as intended. Throughout the film, we see Jamie lie, steal, and blackmail to get what he wants.  As a result, his character comes off as one specific asshole who egregiously manipulates, rather than a representative of youth culture in general.

Ultimately I find the movie well worth watching for all of the reasons I brought up earlier.  It’s both funny and smart in the way it taps into our inherent insecurities about aging and falling out-of-touch.  However, the movie should really take its own advice about smart storytelling, and use the third act as a way to really drive home its primary message about adulthood rather than going on a tangent about modern documentary ethics.

That sequence about Turkish politics? It probably could have been cut.